It was time again to give the hobby crab creel and the drop net a try to see what might turn up. The water in the Spiddal pier was very clear recently as it wasnt raining much so the river is fairly low which is nice because you can see whats going on on the sandy ground while the drop net is down. Also better as there is a lot more fish 🙂

The Crab pot (collapsible net type hobby creel from ebay) and dropnet where baited with a punctured tuna tin. Crab pot went in first, while waiting I went to a shallower place with the drop net and let it down into about 1.5m of water. After about 30 seconds  a lot of traffic could already be seen on the seafloor between crabs and prawn and something I couldnt make out but as soon as it was on the net I pulled it up and what a beautiful beast! A long Spined Scorpionfish. Its belly was all blue as around the mouth, just amazing.

Heard to many stories about their demonic voraciousness so I wasnt tempted in bringing it home. But it would look deadly! After a few more goes of leaving the net down for a few minutes and pulling up came another surprise. A fifteen spined stickleback. Really interestingly designed fish with a nice golden brown colour and his mouth is quite small so he is coming for a trial in the aquarium. I think they feed on small shrimp. If he isnt happy or doesnt feed he will be released again. 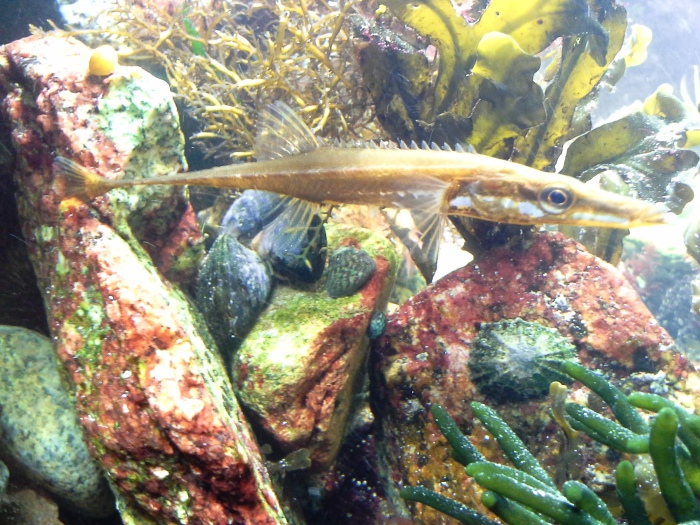 When I checked the crabpot after about an hour it was fairly filled up with about 25 6cm prawns and equal amount of shore crabs and a small edible crab.  I kept the bigger prawns together with some I got earlier from the dropnet for a lovely dinner snack 🙂

I left the pot down again and checked it the next evening… A very different load was in it this time. Not a single prawn, but some full bellies. Two large Longspined Scorpionfish that made a really angry face and even grunted when I picked them up. Then what I think must be Tompot Blenny as it had these typical orange tentacles and four Common Blennies between 10-15cm. Also I beautiful Corkwing Wrasse, one of my favourites. All went back fairly happy looking with full bellies, as they probably had an easy dinner on all the prawns that where trapped in the pot.